In itself the creation of a garden, however big or small, should have a positive effect on the local environment.  Keith always makes sure to design planting with biodiversity in mind – whilst focussing on native plants is a feature of LLGD’s planting designs non-native plants are also used where they have a track record of being a beneficial addition to a garden.  Hard landscaping is also designed with wildlife in mind – this may include a small gap under a fence for local hedgehogs, small spaces in walls designed for insect habitation or the inclusion of separate bespoke bee, butterfly and other insect houses.  The plants themselves are almost entirely sourced from a local grower in Norfolk – travelling only a matter of miles in their entire lives

It’s clear the garden will be beneficial in the long run but it is also important to try and make its creation have as little negative impact as possible.  For this reason LLGD source things like cement powder with the lowest CO2 production during its manufacture, slabs or bricks which have been ethically created with the best work conditions in the industry, wood from well-managed renewable plantations or reclaimed materials which can be up- or re-cycled.  Keith will be very happy to talk about the various ways in which we try to mitigate the impact building the garden can have with you at any time during the project – it is a genuine passion of his

With the climate emergency becoming an ever-greater threat to our environment, it is important that everyone does what they can, when they can, where they can.  With this in mind, Keith is proud to say that Llewellyn Landscape and Garden Design offsets the carbon emissions from both vehicles he runs, all machinery – both petrol and diesel – used in the creation of the gardens, the CO2 emitted in the manufacture and use of the cement powder used annually and the emissions in powering his small studio.  Whilst carbon offsetting is not a silver bullet – it is of course better never to emit the CO2 in the first place – by offsetting the emissions Llewellyn Landscape & Garden Design is able to support a global portfolio of Verified Carbon Standard projects.  This can include projects like the Kenya Trees + Brazil Reducing Deforestation (REDD) project, estimated to reduce 100,000 tCO2e per year, the efficient cookstove programme in Kenya estimated to reduce 34,056 tCO2e per year and improve the health of the people utilising the new stoves or the Wayang Windu Phase 2 Geothermal Power Project in Indonesia estimated to reduce 795,000 tCO2e per year and assuring economic stability by maintaining local community welfare. 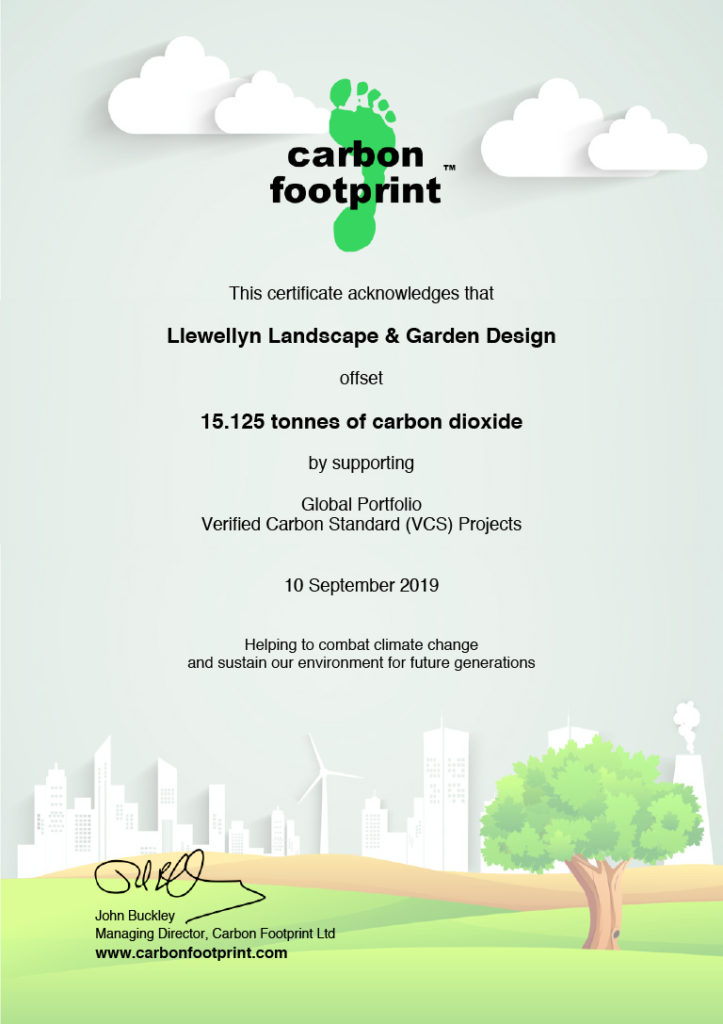 To learn more about Keith of LLGD, visit the about section